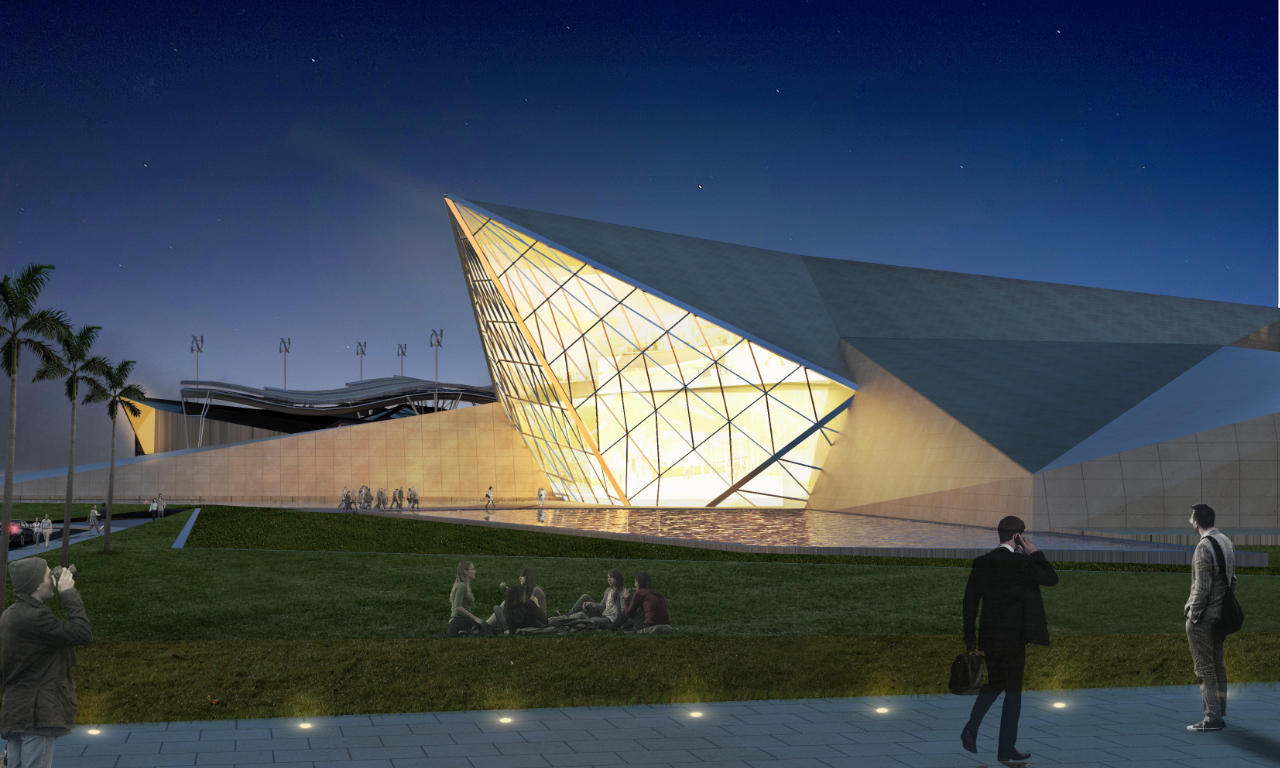 The proposed conceptual design of the science city takes into account the contemporary “blurred lines” in science and unifies the traditional scientific disciplines into four main categories wrapped around the concept of humanity and its place in the cosmos. These categories are: (1) Life, (2) Universe, (3) Earthand (4) Artificial Intelligence. They represent our individual interpretation of science as human beings and constitute the conceptual determinants for the design of the form for the proposed project. The symbolic referenceof these categories is evident in our design proposal as follows:

is the source of all things related to us humans. The cell, its division and replication provides the basis for growth. This symbolism is evident in the organic formsof our proposal, from the tessellated roofs and walls of the main building areas, to the “Cloud”: interactive spaces 40m above the ground that are part of the Observation Tower.

A second element of life is water. Water is key in the design since it is part of nearly every space. The entrance, the plaza, the central “spine” that connects all interior and exterior spaces, all contain the element of water which in all cases is functional as it cools down all internal and adjacent areas of the structures.

is what holds everything together and defines existence. The universe’s true power is gravity. The recent findings in gravitational waves that validate Einstein’s theories provide hope that anything is possible. The two pylons of our design concept are the public plaza and the “Cloud” that forms on the observation tower. The notion of gravity applies to both, as the plaza is a centralized functional public space of the project and the “Cloud” forms 40m above the ground to remind us of the technological advances of society.

is where we live, what we see and hear. Earth is symbolized not only by the affinity of the conceptual design to the topography of the site, but also by the formation of the two main elements on our planet, that are water and solid ground. These two elements are symbolized according to the location of the project by a North to South axis of flowing recyclable water element representing the river Nile, as well as the dune-like roofs of the exhibition spaces, that are also used for energy production as will be detailed later.

is the future, the unknown and the unexpected. Recent and future technological advances are symbolized through the “Cloud”, an interactive exhibition area on the top of the observation tower. The “Cloud” provides a distinctive landmarkfor the project as it extends in all directions horizontally and vertically, leaving aside the conventional image of “the tower”. The “Cloud” can be the identity of the whole project since it will be an immediately recognizable form.

Influence of the site

The proposed project is directly influenced from the site and takes advantage of the original topography in several ways that enhances its design, minimizes costs and maximizes energy efficiency and wellbeing of the visitors and staff alike:

all forms within the project conform to the existing topography of the site, thus making the whole proposal integrated with the landscape, rather than an isolated suburban science museum. The dynamic roof of the main building rises from the ground up and forms the entrance, the conference centre, the administration and the research areas. Parking entrances are placed in the lowest levels of the site so as to limit the amount of excavation to reach the one basement as stated in the brief.

The natural topography of the site also creates the space for the public plaza, which is the centre of commercial and entertainment functions of the complex. The rising slope of the landscape towards the North urged us to create the flexible exhibition spaces, which intertwine with the science park to create a sloping complex of interior and exterior exhibition spaces.

Finally, the central spine that provides access to all the indoor and outdoor exhibition spaces runs on a sloping axis, respecting the topography and helping create the different themes of the Science Park in a natural way.