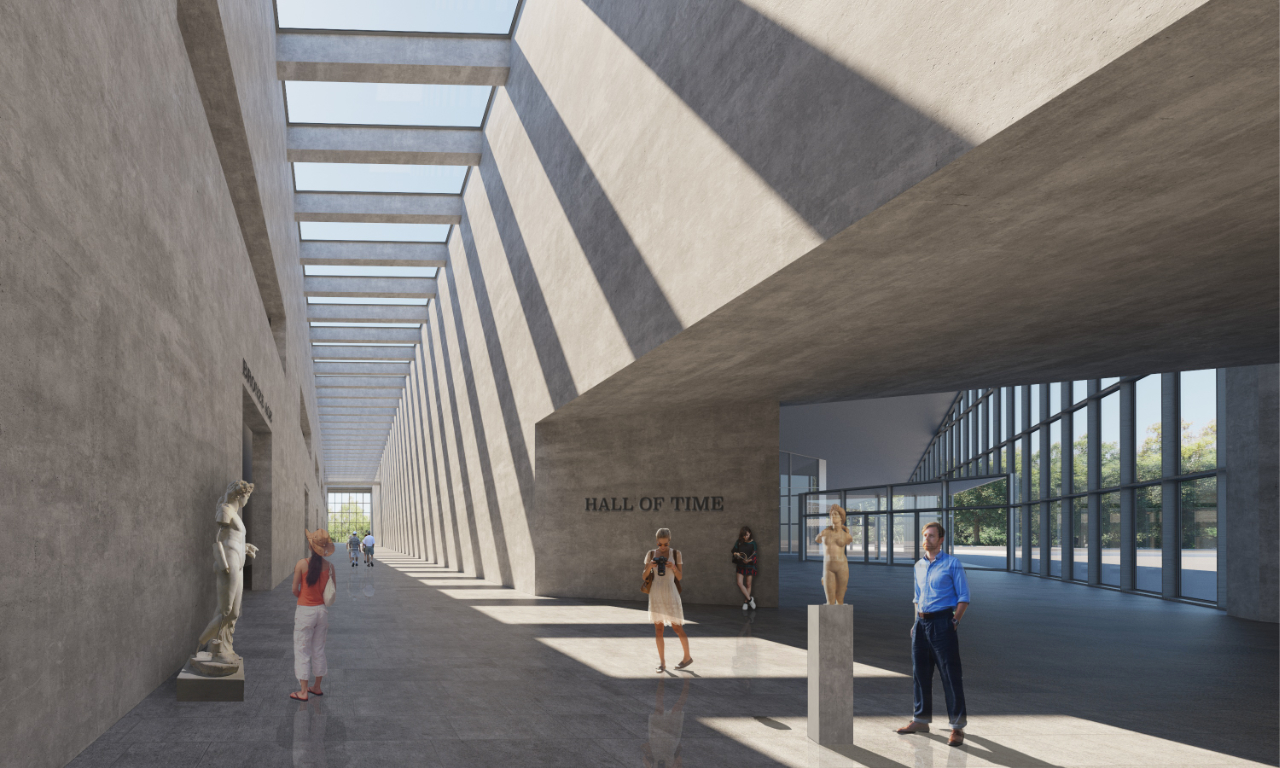 “Time exists independently of what exists in time” – Platonic Philosophy

The common denominator in any archaeological museum is TIME. The correlation between TIME and human evolution defines the framework in which archaeologists work and think.

An “AGE”, as described by Historians, is a considerable extent of TIME associated with a dominant feature in human evolution, i.e. “Bronze Age” signifies the era where the dominant technology was based on bronze metallurgy.

To this end we can define specific MILESTONES of human evolution, achievements in technology, culture and social organisation, that have formed the Cypriot civilisation into its current state.

TIME is represented through a funnelling hallway. In fact the hallway connects with the external natural environment at the end of the exhibition spaces, enhancing the notion of endlessness. This hallway called “The Hall of Time” connects all spaces pertaining to the exhibits together, forming the backbone of the Museum. Attached to it, one can find the functional core of the building services and HVAC, that spans the length and height of the Hall.

An AGE is represented by a distinct spatial entity connected to the HALL OF TIME, and contains all the artefacts pertaining to that specific period of TIME. Furthermore, each AGE is divided into separate exhibition spaces that correspond to different aspects of human presence, such as the social organisation, economic development, cultural activities and private life among others.

The AGES are all connected with the Hall of Time, but also to each other in sequence through MILESTONES, which are represented as voids. These voids can be travelled by short bridges that offer views of the laboratories, the main research and conservation function of the Museum.

Artefact availability is also dependant on TIME, since the further back one goes in TIME, findings become more scarce, resulting in fewer exhibits. This is addressed by designing the layout of the different AGES in a funnel layout, so as to be able to accommodate more exhibition space for more recent periods of TIME.

The layout of the building functions offers a discrete compartmentalisation. The NORTH part of the complex houses the entrance, the periodical exhibition spaces, the cafe, the museum shop, the educational facilities, as well as the conference hall on the ground floor. On the first level below the slopping roof one can find the library.

The SOUTH part of the building contains the exhibition areas on the ground floor, the laboratories and the artefact storage rooms in the basement and all administrative functions on the second level.

Access to the site is possible through the North and South respectively, the South being the entrance of the Department of Antiquities and the underground car park of the second phase of development. The North part of the site contains bus and pedestrian entrance, as well as an underground service entrance that is connected directly with every Storage and Laboratory space in the basement.

The listed building at the north part of the site is not used as a Museum function, but the proposal suggests that it houses a “Hospital Museum of Nicosia” presenting the technology of healing in Cyprus.

Special care was taken to incorporate environmental design issues in the architectural concept. Thus, the voids between exhibition spaces are used for the natural ventilation of the whole building complex, as well as provide daylight to both exhibition spaces where needed, as well as the offices that make up for the second level of the Museum. Moreover, a pond at the southern part of the site adjacent to the voids, cools down the external air before it enters into the voids, maximising natural cooling. Functions that do not need natural lighting, or are not used continuously, are placed in parts of the building that do not offer natural lighting, while, on the other hand, daylight penetrates the whole building vertically reaching the basement. Finally, the skylight glazing incorporates photovoltaic cells, that apart from energy production, offer a percentage of shading to the naturally lit spaces below.

The proposed project uses seismic isolators at the foundation level, so that it can allow large spans with minimum support widths. The basement and the ground floor are both formed by load bearing reinforced concrete walls, whereas the first floor at the northern part of the building is supported by reinforced concrete columns that culminate in a metal space-frame that supports the slanted roof structure. At the second level the roof is supported by metal columns that are based on the concrete slab of the respective level. The roof structure is lightweight concrete on corrugated steel panels. Externally concrete is covered by an epoxy coating, protecting it and giving a shining appearance.

Despite the fact that the project was designed as a whole, provision has been made so that the required functions of the Department of Antiquities, the Conference Hall and the Library can be built in a second phase. This is achieved by placing the Department of Antiquities on a separate level at the top, and the Library and Conference Hall at the northernmost part of the building. In the first phase the space left by the above mentioned functions will be covered by the roof, but it will form open air spaces that can be easily closed in the second phase, without interfering in any way with the function of the Museum. The same applies also to the underground parking space at the southernmost part of the site.

The exhibition spaces can be expanded vertically through the placement of mezzanine levels. These levels can be accessed through a provisional staircase and elevator from the main Hall, as well as individually in each exhibition space.